I am continuing with the doilies today- because I need to get these done before I meet my mother, later this month. I am so looking forward to meeting her. I cannot say if she will like the doilies but I will certainly try to do my best and give them to her.

Here’s where I am with my third doily. I ran out of the cream coloured thread around the 4 1/2 round- I live far away from the yarn shop, so couldn’t get any more. Decided to finish off the round with the blue thread- looks funny but that’s how I am. Then for next round, I joined up a new brown yarn i found and continued on with the pattern.

I added an additional row of double crochet stitches over and above the last row, in order to increase the diameter of the doily.

Here’s where I am with this project. 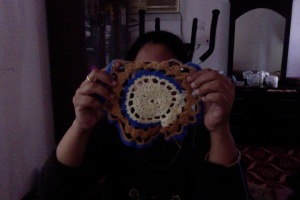 Thanks to Lynn Love from Word Shamble at https://lynnmlovewords.wordpress.com/ for directing me and challenging me to take this up.

Lynn, this is for you.

I had a writing slump for the past 3 weeks-there was absolutely nothing to write about and so nix posts from me. In the meantime, I caught up with some crochet and got a couple of doilies done. The pattern can be found here :

http://glor-crochetgalore.blogspot.com/2010/07/summer-doily-july-doily-of-month.html and I made a couple.

The doilies are simple and easy to make, or I would not have attempted them. I took up crochet because I hoped to be able to make doilies and table covers like my grandmother did. This was what made me take up this project.

This is my doily- I hope to make a set of 6 and hope to gift them to my mum, when I see her next. She will be reminded of her mother, my grandmother, I hope with these doilies. I am praying that I don’t run out of the cotton yarn before my projects are completed.

Thank you, Lynn, once again.

After a long gap ( about 5 months), our landline phone has started working officially today. Why did it stop working, in the first place ? And why did we not get it repaired ?

For one thing, the landline phone was becoming a nuisance- there were calls from all unwanted callers at all times of the day- so much so that we used to pull out the connecting cord and plug the cord in only when we wanted to call someone and not to receive calls. Sometimes some persistent callers managed to get their calls through even in that short duration of time, when we plugged the cord in to call others.

One day the phone gave up and has been dead ever since. And considering how un-pressured we felt, we thought it better to not get it repaired, at least not so soon. So finally , today my daughter decided enough is enough and called the telephone company and in matter of five minutes, the phone was fixed.

No one was happier than my daughter, who is relaxing at home after a long period of studies and hard work. She started calling her friends and chatting.

During one of the gaps she took to catch her breath, the phone rang again. She picked it up thinking it was one of her friends and suddenly I heard her talking in clipped tones, as though she didn’t want to reveal too much. This much I was sure of- it wasn’t one of her friends and from her talk, I gathered it was one of my old colleagues, who wanted to establish connection from the past.

She had to hand over the receiver to me and I picked up the phone with trepidation. And true to what I had thought, it was a co-worker from my previous job. From previous posts, readers will know that this was a job I ran away from and with which colleagues, I didn’t want to socialise but given the delicate situation I was in, I had to respond.

Imagine my surprise, when I heard that she had left the job as well; soon after I left, the job situation had become intolerable and she had started applying to various positions around. And when she got an offer, she chose to jump ship.

For her the problems with the previous job place were, no promotions, no dignity, no respect, being discriminated against and all the usual. Basically employee dissatisfaction.

I am now thinking of why I left and did I do right in jumping off the ship when I did ? Did i have a sort of premonition that things would only go from bad to worse, if I stayed ? Was I being protected by my guardian angels when I made the decision, against all odds, against my husband, my family and children ?

No way. I would rather stay at home and be my own self rather than be someone else in a world where there was no role for me.

Was I being too self-centred and self-protective when I left- was I being overtly sensitive- I guess so. But I am sure I am right and events hence have shown me that I was right and praise God that I could choose the road less taken when the time came.

Yesterday we decided to switch off the electricity in our house for one hour, for the Earth hour. A few of our neighbours joined it. It took some preparation. I got a few candles ready and some matches. Then we popped some corn in the microwave, so we could while our time away during the hour and then we called our neighbours together for a tete-a-tete outside our house. It was fun. Sara provided lemonade for all and the popcorn was ours. We spent a long hour, even longer than what we planned to do, talking and socialising in a way, we had never done before. It made us realise how much our life was dependent  on technology and how much we missed talking to people the conventional way. A new experience in bonding with one another and our neighbours.

I needed to prepare dinner, in the middle, so by candlelight, I switched on the gas stove ( using a gas lighter) and cut vegetables and boiled rice- it was a first for me. I enjoyed it. We ate by candlelight too.

Thank you, Earth hour for allowing us to be together.

I was asked by Dr.Linda from drlindallabin.wordpress.com to participate in a challenge which is to write 10 lines on love, with the word love in each line, each line being only 4 words. I struggled to write this poem, if you might call it that – it took about 2 weeks for me to get a few words together.  I know its horrible and means nothing but that’s all I can do. It proves I cannot ever be a poet.

Love you always, whatever

I tell my love,

Love you for ever,

Love to live together,

Live to love together,

Even death will love

Those who love forever.