” The only difference between stumbling blocks and stepping stones is the way in which we use them.” – Anonymous

Last night I was driving home with my younger daughter after her evening classes. She needed to go shopping to get things for her travel later next week. We tried to get to the nearby mall, which was on the other side of the road from our house.  The road was three lane with fast moving vehicles in both directions; there was no way I could cross across the lane and then turn left into the road that led to the mall.

As there were cars behind mine, I had to move forward in the extreme right lane and looked for a turn to the right to go back to the place where I could try to cut across the multiple lanes to get to the mall again. The road back led me through some deserted lanes through which I have perhaps not driven before- I can’t say.

I followed a big white Land Cruiser. It moved slowly almost purposefully. It looked like it was not going to let me pass it by. At a road bump, it abruptly stopped. The driver’s door opened and a young gentleman came out. He looked like he was approaching my car. Against my better judgment I opened the window. The man approached me, and without hesitation told me ” Switch off the light”. And he walked off.

Mystified, I looked at my daughter and she looked at me, equally wonderingly. What did he want ? Drive without my lights ? At night ?

Soon he moved out of the way, turned into a house and I went along the road. This time I got to the cutting on the road, could cross the three lane highway and make my way across to the mall, where we did our subdued shopping.

Through the night, I lay thinking about this incident. My approach to surprising incidents these days is , ” Thank you, God- Praise God”. I must confess – this time it was rather half-hearted but I did it repeatedly till I meant it.

This morning, the thoughts were once again harassing me. As usual, it was why did this happen to me ? What if he had attacked me ? What did I do ?

And then it struck me a few minutes after my daily meditation- I am not very proficient at night driving. I don’t use the headlights and the dim lights well- not having learnt driving at night from an expert. I have been learning from the few times I drove at night by myself. The young man was instructing me about how to dim light when driving, so that energy could be conserved or was teaching me how to drive better.

Immediately I felt better and have been feeling better throughout this day.

And then I chanced upon this inspiration – the difference between ” stumbling blocks” and ” stepping stones” is the way we use them or choose to look at them. Last night this experience was a stumbling block; today it is a stepping stone for me to become a better driver. 🙂

I find that sometimes when I am constantly thinking of something, maybe something I watched on TV or read in a book or something someone told me, something related to that thing comes up in my own life as a strange coincidence. An experience similar to this happened yesterday.

Let me quote a story I read in Norman Vincent Peale’s the Power of the Plus Factor first.”

” One of the most remarkable men I ever met was a native of Lebanon, Musa Alami. He had been educated in England, his family had been quite well off until in one of the disturbances that periodically convulse Lebanon, they lost everything.( Here I must tell you , that Musa Alami belonged to  well reputed family from Jerusalem). Musa Alami found his way to the bleak desert country of the Jordan River fallen not far from Jericho.

This sun-scorched land had probably not changed much since the days of John the Baptist. No crops could grow because of lack of water. There were no funds or equipment to dam the river Jordan. But somehow Musa Alami, who had read of successful irrigation in other areas using subsurface water, became convinced that there might be water underneath the burning sands. And he announced, that he was going to dig for it.

Jeers and scornful laughter greeted this announcement. The old Bedouins( natives of the area) pointed out that the desert had been there from time immemorial. The water of the Dead Sea had once covered the region; the sand itself was full of salt. Musa Alami was a fool, or perhaps a mad man. And it wasn’t only the Bedouins who laughed. Government officials and scientists from abroad were equally scornful. No water was there. No water could be found there.

Nevertheless, aided by a poverty stricken refugees from the nearby Jericho refugee camp, Musa Alami started to dig.

With well-drilling equipment ? With steam shovel or earth removers ? No. He and his motley crew dug by hand, with pick and shovel. Down they went under the blazing sun. Day after day. Deeper and deeper, while onlookers jeered. Down they went, this dauntless man and his ragged friends, week after week.

I am sure it was the Plus Factor.

One day , six months after they started digging, the sand became damp. And a little deeper it was wet. Finally water, fresh water, began to fill the hole. And Musa Alami and his friends did not laugh or shout or cheer. The wept. An ancient Bedouin man said, ‘ Musa, now I can die. I’ve seen water come from the desert.'”

In those lands where great streams of water gushed out of the desert, Musa grew crops and fruits and truly made the land a land that flowed with milk and honey.

I have a friend who works with me who is from Palestine. I asked her yesterday, if she had heard of Musa Alami. A few moments of silence followed, Then she asked me, why do you ask?

I told her, I have been inspired by this man’s story for at least 15 years, ever since I first read Norman Vincent Peale’s book . She told me Musa Alami belonged to her mother’s family. He was an uncle of her mothers’. Her mother and father had planned to move to Jericho right after they got married, so they could stay near the UNRWA offices there. And so they had seen the plantations and the water themselves.

I guess for me, it was a more a moment of shock and surprise too. The very person whom I used to read about to my girls when they were little now seems to be someone who I might have met, if he was alive now through my friend. Do you believe in coincidences ?

Success is to be measured not so much

By the position one has reached

in life as by the obstacles which he has

overcome while trying to succeed.

Fluff ball had kittens last month. One survived the outdoor life. From our back garden, which has a lot of trees, Fluff ball and little Feather have moved to our front garden. Feather has the classic eyes you see in the sweet kitten photos you see on the internet- the puppy dog eyes that droop downwards, unblinking stare and almost fearless look into your eyes.

My younger daughter named him/her “Feather” and we think she must be about  6 weeks’ old now. 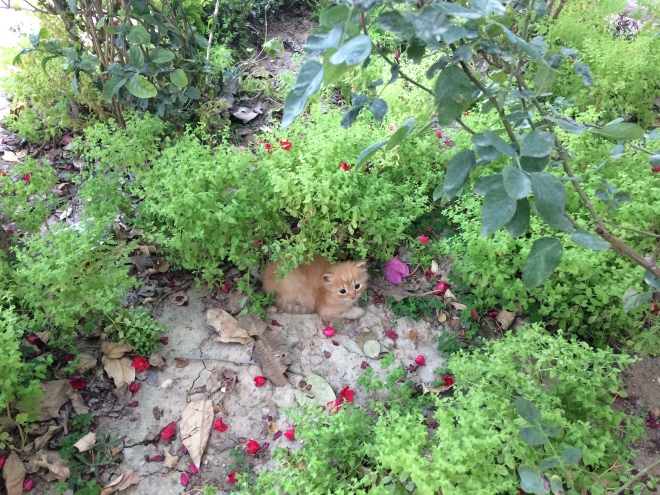 We don’t water this part of the garden all that much, in order to not scare Feather and create a fear of water, which she invariably will have. 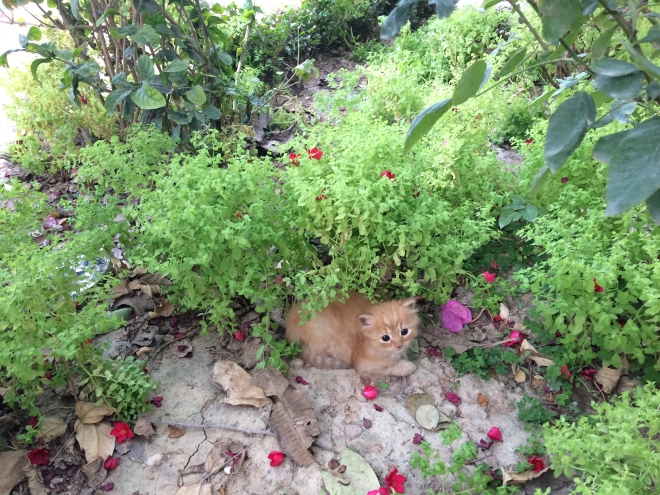 Her refuge are the weeds that grow in the garden and she seems to have a whole play field to herself. She posed for the photographs we took patiently and curiously eyed these strange two legged creatures who smelt and looked different from her mom but seemed interesting creatures.

A few spring flowers on the other side of the garden from where Feather Florence lives.  Love the spring time.

Its good to catch up with your children once in a while. I don’t mean the occasional phone call that asks them how they are doing and the occasional email or text sent when they need something. I mean really catching up.

Daughter 1 is back home for a time now.  The first thing Daughter 2 noticed about Daughter 1 was that ” she had done her eyebrows”. So a comment was passed between us. I am one for a totally natural look- I prefer to walk around with all the hair God has given us, even the ones on my upper lip and especially the ones on my body. An exception has been made in certain areas of my body for hygiene reasons but otherwise, a razor or the wax and me have had no significant meetings. Daughter 1 is not a hairy girl. But under peer pressure, she started getting her body hair removed ever since she went to college and has ever since. In the past this has led to arguments between us but now we have reached a situation of equilibrium, where I have accepted her without hair and she has sort of accepted my view on hairy bodies. ( I like even men hairy- call me weird, if you will).

So last week, Daughter 1 came with her eyebrows all shaped and trimmed and whatever the words are. To tell the truth, I never noticed till daughter 2 mentioned it. My daughters and I are blessed or cursed with very little eyebrow hair. It never grows, falls, or has shape. It has been and always looks the same- there may be about 35 hairs in each of our eyebrows- that is it.

At the end of the conversation I had with her, she mentioned – I am an adult now, ma, nearly 25 and I did it with my own money. That silenced me and got me thinking.

Over the past week, every conversation we have had seems to end with that statement- I am adult now ma.

Who is growing up and who needs to grow up now ?

I think it is me- I have never had her make comments about my appearance, my fatness or thinness or my white hairs or black hair. Isn’t it time for me to treat her as she treats me- fair and just.