Today’s post is based on the “Five Helps for the New Year” given by Bishop Michael Ramsey to his clergy, which our own church has adopted for the new year. It came to me via a message sent out from our church to all members.

Five Helps for the New Year

I think there is scope for at least 4 New Year Resolutions here. And I am going to work on them.

We had four days of paid leave granted by my University for Christmas and post Christmas celebrations. It was a well needed break. 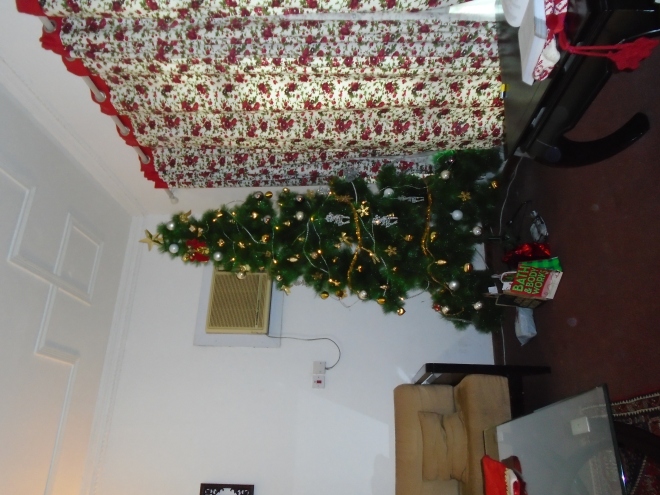 Our Christmas Tree at home

On the Sunday of Christmas, I managed to go to church after a long time here. I had been to church a couple of times in the Summer and once in Birmingham but not here for a long time- so it was an event worth the celebration. Being a working day, the people who attended were not as much as might have been expected on a regular Christmas that fell on the weekend. But my daughter who had insisted on going, was happy because she could sing carols along with the choir. The choir is seated on a terrace above the church so we cannot see them from the pews below. But every now and then, when the pianist played with a little more force than usual, we saw people turn up and look at the choir. At first, I wondered what was up there but I soon perceived  the variations in tone of the piano. But in keeping with the Christmas spirit, it made sense as when a particularly meaningful verse was sung, there was more emphasis given in tone.

My daughter had  her Physics mock exam on the 27th, so she needed to get back to her books at the earliest after the service, which ended at 12:30 pm. So after the regular Fellowship they had in the church hall, which was cake, chips and coffee for those who wanted it, we rushed home. I started up a vegetable fried rice and my husband popped over to learn how to make a chicken roast as he is leaving soon to live alone for about half a year and will need to cook food on his own. Our chicken roast is spicy and not at all like the English or American chicken or turkey roast. The chicken is cut in small pieces, marinated in a lot of spices, a gravy made with plenty of onions, garlic, ginger and tomato and the marinated chicken is allowed to cook in the juices from all the vegetables. It takes some time but is well worth the effort and goes well with a rice or roti or a naan bread, if you have some handy. For sweets, my daughter’s ginger bread men came up and they were made gluten free considering she is off wheat because of polycystic ovarian tendencies she might have. The flour was millet flour- unusual tasting  but edible.

The rest of the 25th and 26th, we spent studying physics together. I was glad I didn’t have to take leave from work and we could manage to study with the official time off from the university.  The Physics exam went well on the 27th- I went to school to collect her after the exam, which again is a privilege I don’t often get, as I am at work when her school finishes. So I am grateful for that mercy.

On the 29th was her English exam, and she planned to write the exam without preparing too much for it as she wanted to sleep off her tiredness after the Physics exam and also learn some Biology for her Biology exam which would be on January 3rd. The English exam went well- so that is ok.

For me, I worked on a crochet project during these days- a wrap made in multiple colors. Most of my work seems to end up in multi colored hues as I run out of one color of yarn after I have started the project and then need to make do with what I have.  I will post a picture soon. ( A Bob Wilson project) 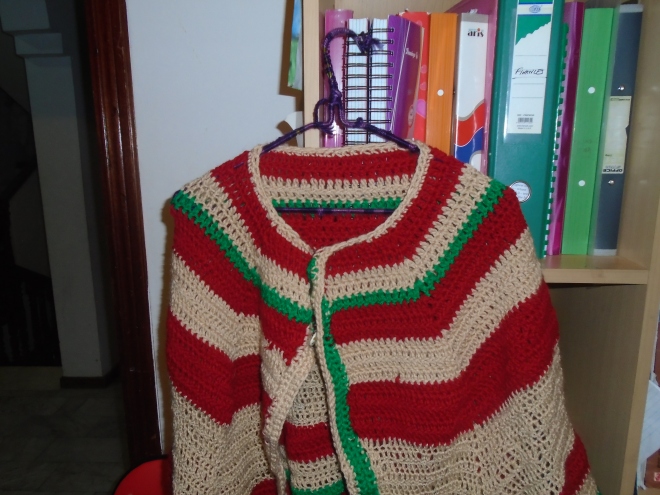 Inspired by my crochet success, I went to the yarn shop yesterday and spent about 500 of our currency which would come up to about 100 $ to buy yarns of three different colors and hopefully in sufficient amounts. My daughter has asked for shawls which she could wear while she sits in classes where the AC is turned on high even in winter. 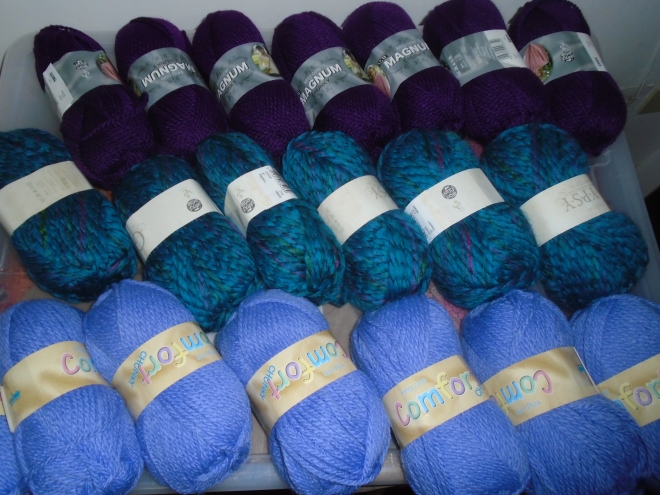 All my new yarn

I had to work yesterday but there were very few at work-most preferring to take a leave for the one remaining day of the week and then coming fresh to work on January 1, 2017 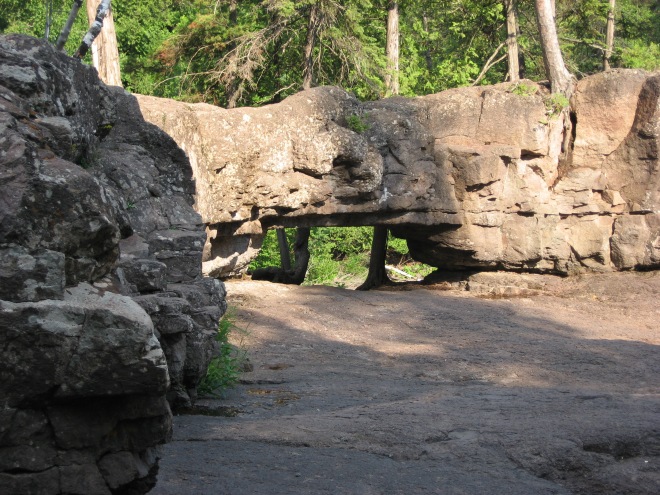 There are days when blogging inspiration is hard to come by.  Today is one of those days. It seems small seeds of ideas pop into my brain and scatter before they have a chance to take root.

I am not sure why this is an issue today. Maybe it is because I was already a day late with my Monday post and my brain just can’t quite reset to the normal blogging schedule. It is hard to get my thoughts back on track.

What starts out as an easy hike quickly becomes a test of endurance and perseverance. I find when those paths starting getting a…

Do you want more eyes on your posts? Do you want more followers? If you answered yes to these questions, then email me and ask me about my Partner program! I only have a few openings available so don’t delay. This opportunity is perfect for the blogger looking to gain extra exposure for their […]

via Would You Like To Partner With Me? — Dream Big, Dream Often

I was reading about the recent wedding in California where a woman died after a tree fell on a wedding party. The woman who died was the mother of  the bride.

I have a relatively uneventful work situation these days. Except for the occasional contribution from the difficult co-worker of whom I have written in previous posts, life is quite passive here. I enjoy it for I don’t enjoy drama- perhaps there was a time when I would have but not now.

Yesterday I was called up Building Operations and asked to visit their office. Like a six year old girl, called to go to the Principal’s office, I waited with trepidation. On one side, I was thinking maybe they were calling me for a Christmas celebration and on the other side, I was thinking like that six- year old trapped inside a 47 year body.

At 2, I dutifully kept my appointment. I was asked to sit down and the woman there asked me to sit down. I was surprised when she closed the door, as though she wanted to discuss something confidential. I was even more surprised when she said, whatever we talk here will never go out of this room. And then she told me. The matter was embarrassing, so embarrassing that I can’t share it here. Suffice to say there was a complaint against me and I needed to pull my socks up or face retribution. My gut feeling was right- I was in trouble.

With a red face, I crept up to my office. I was red in the face and couldn’t face any one. I was thinking why me God ?

Then it struck me to say ” Thanks”. This is what I have been doing for about 3 months now. I say thanks God for anything and everything that happens in my life- good or bad, beneficial or non-beneficial. And it has helped me take a positive attitude to life and I know that God is in control. Also I don’t feel like taking refuge in food and again, I don’t need to carry my official baggage home as I would have done previously because my heavenly father and I know what has happened and that is enough.

Last night sleep eluded me as I was distressed but again I said Thank you God.

Now a day later, after analysis, I have come to the following conclusions .

How is all this connected to the wedding in California ? A good day, a wedding day, started off on a beautiful note but ended in a tragedy- who knew what course life was going to take that day. I started off yesterday as any routine day- happy, carefree and see how I ended it- heavy laden, embarrassed, worn with burden. Anything can happen to any body at any time. There is nothing that can prepare us for what will happen. Embarrassing moments come in the life of the most careful and carefree person but it is how we deal with it that ensures how we go forward in life.

A post on what I have often written about- gossiping- but never have been able to put so lucidly as in this post.
Susie

On a recent visit to the home country to see my daughter, her friends and she( 20 somethings) persuaded me to go with them to a Disney movie.

I must confess I am so out of touch with things, that I have never watched a Disney movie. I went along with them because I like to think they wanted me to go with them but I was planning to sleep through the movie in the theatre and catch up on some forty winks.

The sound effects kept me awake at first and then the 3 D motion of the images put a scare in me. I could not sleep for the life of me.

Sleep being deprived, I had to watch and I do not regret it.

Muana is a young girl who lives on a Pacific island. The story talks of old world values, family, simple pleasures of life, little materialistic desires and a world which is near idyllic. The story is punctuated with beautiful songs and dances. Then Muana has an adventure and what an adventure it was. It took her far from her familiar life to a world unknown, in search of unknown treasures and restoration of her island’s pristine heritage. I would say, this was a must-watch movie.

Thanks to my daughter and her friends who took me into their world for a little while.