My daughter is coming home today. It has been nearly 5 years and 9 months since she left home in 2011 to earn her degree at her university. Today she is a full fledged doctor and more important to a mother’s heart, back home to her mamma.

I remember her as a little toddler holding my hands and walking as we went along country roads, looking at stones, or little plants along the way, singing little songs and talking in the language only she and I spoke.

I remember her after her baby sister came when she thought that I might not like her as much as before and the times I tried to make up to her and to reassure her that I would always be there for her. I have always felt that from the time her sister arrived, she grew up. She helped us a lot with the upbringing of our littler daughter. It was unfair to her but she did it so cheerfully and she really loves her little sister. I often think that since that time she has been a little distant with me. The times we spent together were not the same any more. I was a lot more harangued and tied up. She did her lessons alone. Basically she grew up a lot alone.

But when she reached her teens and we relocated to another country, she came to her own again. It seemed like she had regained confidence once more in herself. In her new school, she shone- she made a lot of new friends. She grew up- my little girl. Till she left us for her college, which was to be her home for over 5 years.

Today she comes back; I am not sure how long she will be with me- for I can’t see where her life will take her.

Little daughter- you will always be my little daughter, even though you try to reassure me that you are all grown up. I wish I could ease the worry lines from your forehead once more as I did for that little girl. I wish you would transfer all your troubles to me and I could deal with them. I wish you would find comfort and faith in our Heavenly father once more. I wish for you all the love in the world- I pray for the love of a good man in your life, one with whom you can knit your life together and have fun and good times together. I wish for you a future with little sorrows and a spirit of love and honor and integrity. I wish for you a smooth road ahead.

Little daughter, I want you to know that as long as I am alive, I will be there for you and you can bring your troubles to me. But more than me, I would like you to rely on our heavenly Father who can carry you through everything.

Sasha who works in our research office has just returned from a trip to California. She brought me a packet of chocolate mints- my favourites but I have kept them and been so good with them- not even peeking at them.

While walking through a mall in our town, Sasha found a store that sold make up products. I am not sure what the brand is but it was something pricey.

One other colleague, Hana,  had mentioned once to her that she liked the body cream from that particular brand. Sasha being so kind, went into that shop and looked for that product and found it. There were 5 tubes of different “flavors” ( is that the word ?) in one box and she picked it up for Hana.

A few days later, Sasha was in the office of another of our common colleagues, Ann. While visiting with her, Ann casually opened a cream tube and started applying the cream on her hands, while talking to Sasha. Sasha thought there was something familiar with the cream, so she asked Ann to let her look at it. Turns out the cream was one of the five flavors of creams from the same pricey brand, she had gifted to Hana a few days earlier.

Embarrassment ? Anger ? Frustration ? What would be the emotions that you would have faced if you found one colleague use a gift that you had gifted another one at some time ?

Has this happened to you ?

It has been a long time since Sunday School days when each week we had to commit a Bible verse to our memory and quote it to the entire class. I have tried this on occasion over the past 30 years, after my Sunday School days but have not gotten far beyond Psalm 1 or Psalm 91 and sometimes, Isaiah 40:31 ( wings of eagles). As I grow older, I found, I am unable to commit Bible verses to memory. And again I find what used to be so easy to understand as a child, is not so easy any more. I used the old King James’ Version when I was  a child too and I could understand the meanings of verses quite easily I think. Now if I need to google to understand a verse. Have you faced this ? I sometimes ask blog friends and they explain passages to me too.But I deviate from the topic.

Over the past two weeks, I have had some time for personal reflection while my daughter was preparing for her exams so I decided to learn one Bible verse every week. Isn’t that ambitious.

So far, I have learnt

I am trying to repeat what I learnt through the week, so it is ingrained in my brain and then I am forced to act according to what I have committed to memory. Is that a good plan ?

How do you do your Bible readings ? What do you do when you do not understand a particular passage ?

A moment ago, I thought this should be my blog post for the day. We have a work day today and so at work, I heard from my co worker Kat that she had a problem.

Driving along on a Saturday afternoon towards the Marriott hotel in town, she saw a cat sitting on the concrete divider on the very busy highway, she was driving on. She thought in her mind, what is that cat doing out there- he is asking for trouble, he is going to get run over . She is not a cat lover by any shot. Anyway she passed him by for a bit and then her conscience got the better of her, so she U-turned and reached back to the spot  where she saw the cat. She managed to stop the car on the very busy highway and managed also not to get hit by passing cars and managed to grab the very ungrateful bunch of ill- temper and throw it hissing and spitting into her car. Then she drove to Marriott to complete her errand. She was at the hotel for three hours during which time, she let the windows of the car open and left some water for the cat, in case he got thirsty. By now you would have known that she is a very kind lady.

After her visit she drove back home but there was no sign of the cat, so she guessed it had left her at the hotel.

Fast forward that night, when she got a message from her neighbour that the head lights of her car were on; rushing out she saw that the lights were indeed on but she couldn’t figure out how they came to be on.

The next morning she found paw prints on the car seats and guessed her feline guest was still in the car but couldn’t be traced. She looked everywhere a cat might have gone to but no- she even got Pepper her dog to have a go but other than the fact that Pepper came back petrified, there was no sign of cat.

Finally convinced there was a cat poltergeist in the car, she put out some cat food, expressly purchased for the purpose and left water out too.

Now it has been nearly 36 hours but the cat still hasn’t come out.

All this time, she has been using the car and driving the car around with no sign of cat.

This morning there was cat poop on her car seat, so the cat was definitely there but where, no one could tell.

Just now, all of us office staff went out to the underground parking lot to look into the car and coax  the  cat out but to no avail.

No sign of cat. We have concluded that the cat is in the dashboard and other than removing the dashboard there is no way of getting the cat out.

I need to add that the car is a rented one and needs to be returned to the agency tomorrow.

A beautiful poem by Jackie

a cooking pot and twisted tales 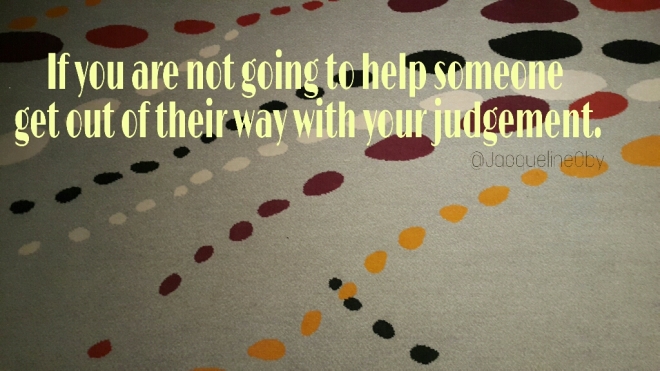 I have no patience
for those who spend
a better part of their time
judging and labelling others.

You’ve never worn
the other man’s shoes,
how exactly do you know
how undersized and pinching they are?

Quit being obtuse
You don’t smell like roses yourself.
If we look hard enough, I bet
there’s are loads of manure in your garden.

Tend to your own garden
called your life.
Concentrate on being the best you
that you can be.

Concentrate on being a supportive anchor
for someone who might be adrift,
but leave your judgment at the doorstep
otherwise, you’ll wear out your welcome.

Remember that not all who wander
have truly lost their path,
they are simply in search of a beacon
to help them find their way back.